Next time you pick up a Discovery Map or peruse the Discovery Map website, let your thoughts drift to the many stages of conception and production that go into every one of our maps. As I reported in Day in the Life of a Map Maker, from research, travel/exploration, layout/editing and coloring, there’s a tremendous amount of time and effort that goes into the creation of every Discovery Map destination. And not surprisingly, just like everything about our brand, there’s always a good dose of fun that goes into the making of our maps. So glad we’re not in the vacuum cleaner business! (Although I’m sure that has its entertaining sides as well.) 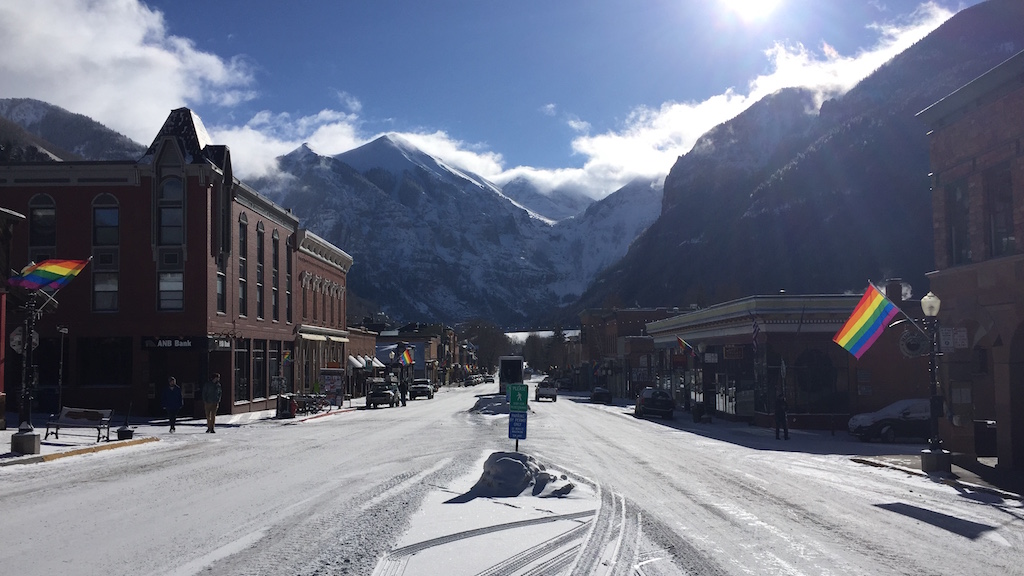 The research phase of one of our newest maps for the beautiful Rocky Mountain town of Telluride, Colorado proved to be one of the most enjoyable this past February. Terrific panoramic views, skiing, food and old friends were involved, which made the discovery process all the more rewarding.

I haven’t talked about Peter Hans, the driving force behind Discovery Map International yet, however, this post allows me to introduce him to you. He’s smart, super business savvy, a lover of mountains, food and travel and an all around nice guy. (Good looking, too, and I promise he did not tell me to serve up a single one of these accolades.) He worked in the banking industry in Zurich for quite a long stint before settling in Waitsfield, Vermont and acquiring Discovery Map (formerly Resort Maps). In addition to his many responsibilities at this growing business (over 150 maps and counting as I write this) and with his family, in the winter he also works on ski patrol at Mad River Glen for extra kicks and giggles. So you can bet that when it came to traveling to Telluride, Colorado in February, Pete had his bags packed before you could even say powder day.

Laura Potter, Production Manager extraordinaire, also made the trip and spent the majority of the time sussing out the historic town of Telluride and neighboring Telluride Mountain Village, the epicenter of Telluride Ski Resort, snapping photos at every turn, images that would prove invaluable for the map making process. “In general, any photos we take of the territories are meant to help capture the character of the town for the artist and also serve to remind us of anything we want to include,” Laura explains. “The gondola was very helpful for me in gathering much-needed photos of the area, including the buildings for both Mountain Village and Telluride.” 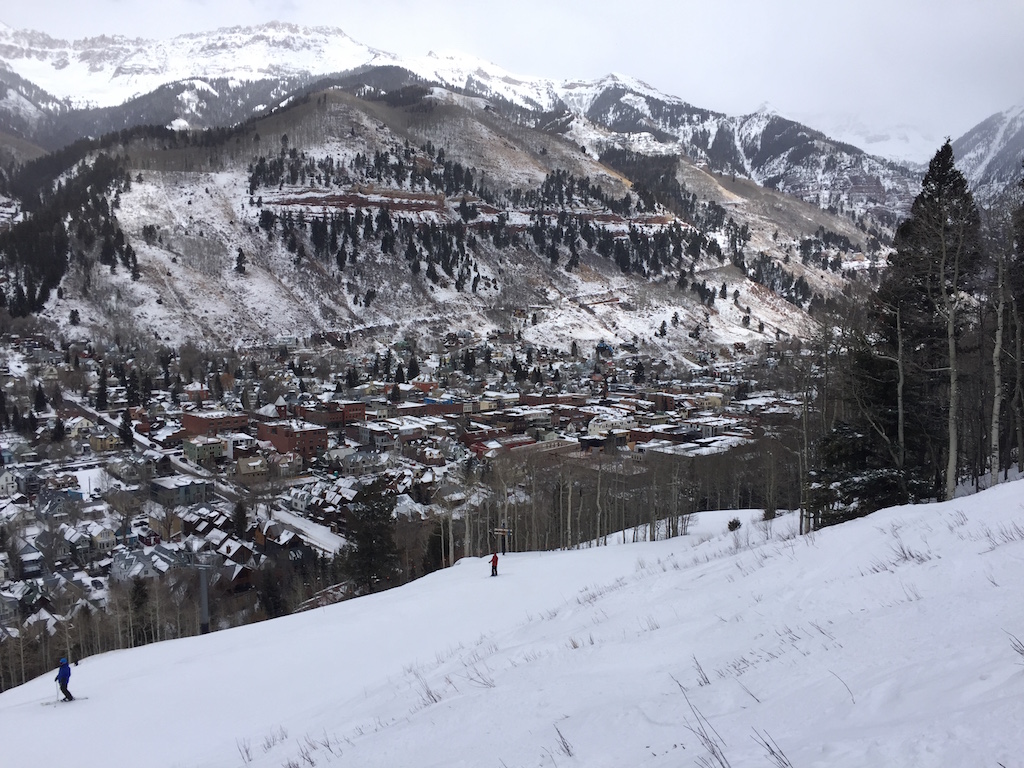 Pete took his pics from the ski hill, a move that afforded him a bird’s eye view of T-ride and its majestic surrounding peaks in addition to allowing him to carve some sweet turns on this renowned ski resort’s famed slopes. (Hey, it’s important to sample the product firsthand.)

Pete and Laura’s visit took on some local flavor when they met up with Maribeth Clemente, a childhood friend of Pete’s who began writing content for the Discovery Map website last summer. Maribeth, a travel writer and published author, also shares a love for skiing and the mountains. She has lived in Telluride for over fourteen years and has worked as a ski instructor for the mountain for as long. Although she was busy working during Pete’s visit, they did manage to squeeze in an end-of-the-day run a couple of times, just enough to gush about the creamy snow conditions and the superlative ski experience found in Telluride. 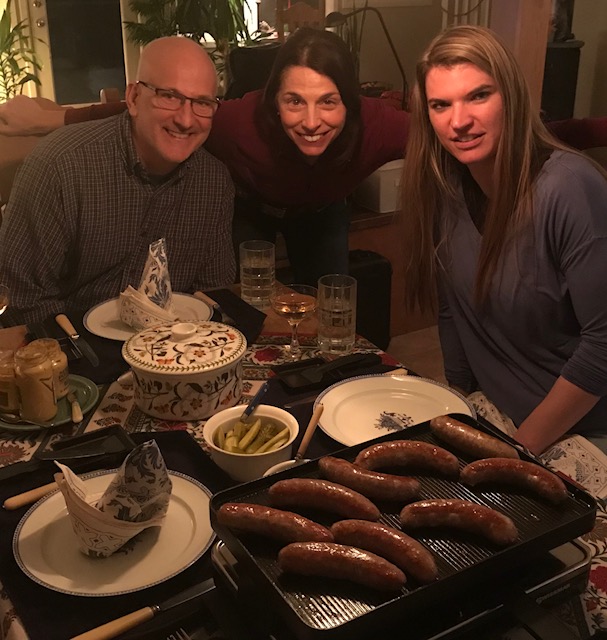 Being an avid skier, Steve Togni, Maribeth’s boyfriend, was happy to duck out of his job as General Manager of Mountain Lodge Telluride for a few hours to show Pete some of the less trammeled–and steeper–spots on the mountain for which Telluride is known. Of course they had to top off their mountain experience with a dinner at Steve’s where Maribeth served up a raclette, a traditional alpine dish featuring a gooey melted Swiss cheese served over boiled potatoes, grilled sausages, pickled cocktail onions and cornichons–yum! As is the custom, all was washed down with copious amounts of perfectly chilled white wine. Chocolate-covered strawberries topped off this festive repast but sadly few pictures were taken of the food. (Perhaps due to an overflow of wine.)

The only one missing was Brian Lewis, owner of Discovery Map Telluride. The best way one can explain that happening was that Brian was back in Montrose, an hour and a half from Telluride, spending time with his family. Maribeth finally met up with Brian once the mountain closed the first part of April and spent a good amount of time reviewing the black-and-white version of the map for necessary changes. (She’ll take a look at it again once it comes back from the coloring process where essential landmarks and other important sites and businesses are featured.) Maribeth was excited to hear about Brian’s innovative marketing ideas that include a strong social media presence and lots of really cool apps. 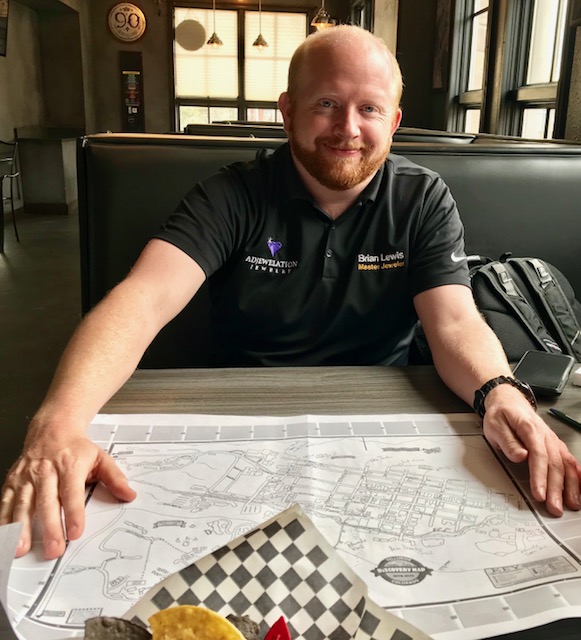 Fresh from his second trip to Discovery Map headquarters in Vermont to keep an eye on the production of his map and complete some training, Brian’s enthusiasm around his new baby was palpable. A jeweler by day, Brian said, “I just really like the idea of getting out and about and meeting people. I’m already having a lot of fun discovering more of Telluride as well as the little mountain towns of Ridgway and Ouray that are featured on the other side of my Telluride map.”

“The photos I took of Telluride were intended for Gary, the artist,” Peter told Map Geek about his shots. “Our artists need oblique angle aerial photos, so they can draw the building facades and rooftops.In my perfect world, all map areas would have the topography of Telluride, so I could help with the prep work while on skis!”

Sounds good, Pete. Let’s hope that Telluride is just the beginning of more stunning and superski-worthy destinations to be added to the Discovery Map family. And here’s something else to keep in mind: Wait ’til you see these magnificent mountain towns in the spring, summer and fall!

Note that Discovery Map Telluride will be launched next fall.