With Jack Frost peeping around the corner, I have one thing on the brain; mountains. Though I don’t consider myself an athlete, I do have an affinity for, you guessed it, ski maps. And, oh, how far they’ve come...as mountains have grown over time, so have the maps.

Ski maps today have come a long way from their original form, with apps to measure your speed, distance, and track your location. But, there is something to be said for the nostalgic blast from the past holding a paper map (ahem) gives you. Discovery Map knows a thing or two about paper maps, and certainly about ski destinations, considering some of our locations are in prime ski-territory. Below you’ll travel back in time to view the evolution of ski maps, and don’t worry; it’s all downhill from here:

Big Sky Resort Known for having the ‘biggest skiing in America,’ Big Sky Resort boasts more than 5,800 acres of prime terrain. Montana native Chet Huntley kicked off the inaugural season in 1973, and a short while later the resort was purchased by Boyne Resorts in 1976, sparking developmental growth galore. Today, Big Sky Resort and neighboring mountain Moonlight Basin have merged to form one of the largest ski resorts in the United States, with over 250+ named runs and 4,350 feet of vertical - talk about a powder-move. 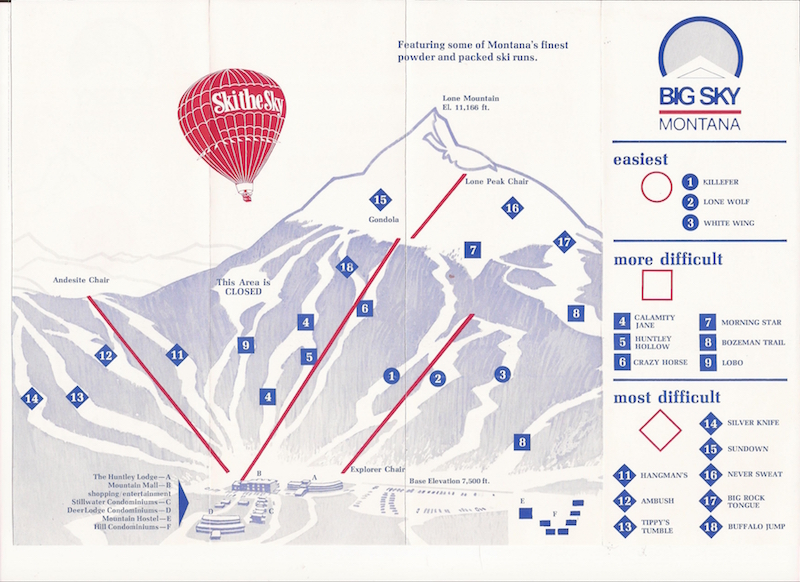 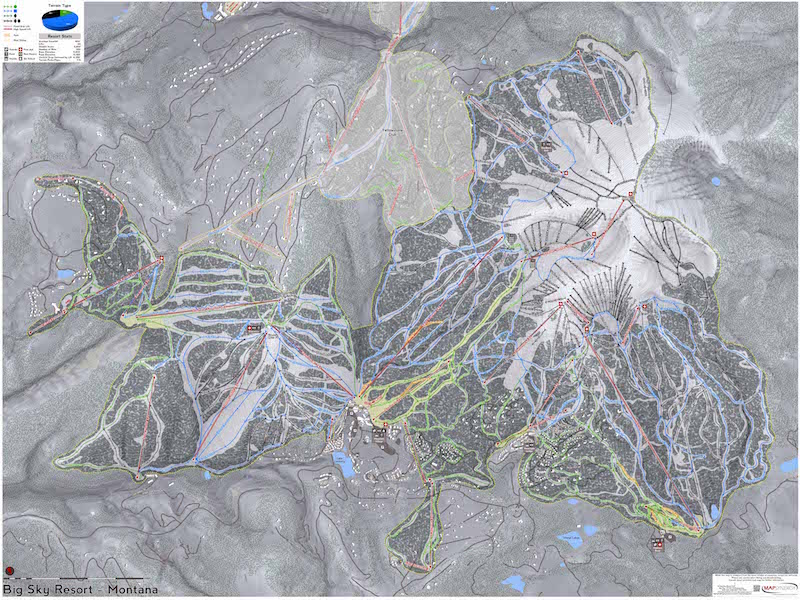 Sun Valley's Bald Mountain Count Felix Schaffgotsch founded the land in 1935 on which Sun Valley’s Bald Mountain is built, and within eight months, Bald Mountain was opened to the ski-savvy public (though there were no ski lifts until 1939, eek!). Bald Mountain has carved its way into winter sport history as a world renowned ski resort, attracting an average of 2,900 skiers per day. Although all snow-sport enthusiasts are welcome, beginners beware; terrain considered to be ‘easy’ on Bald Mountain would be considered ‘intermediate’ at most other ski areas. 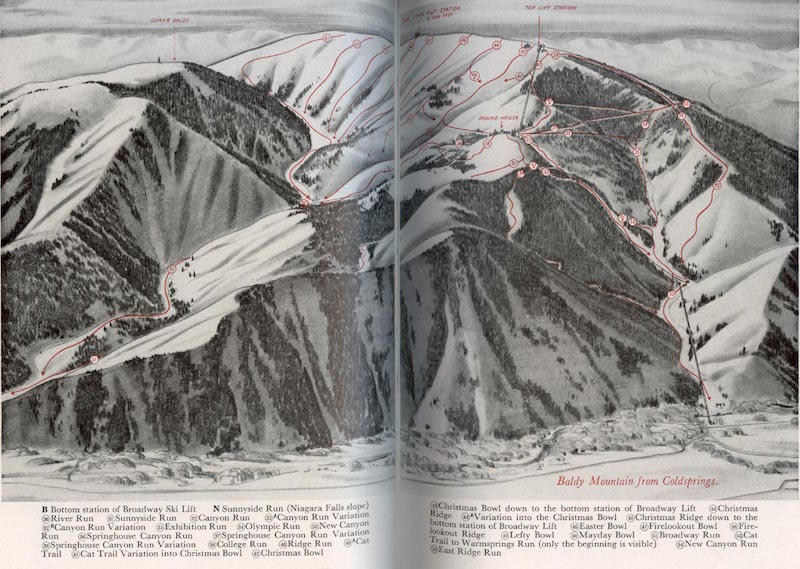 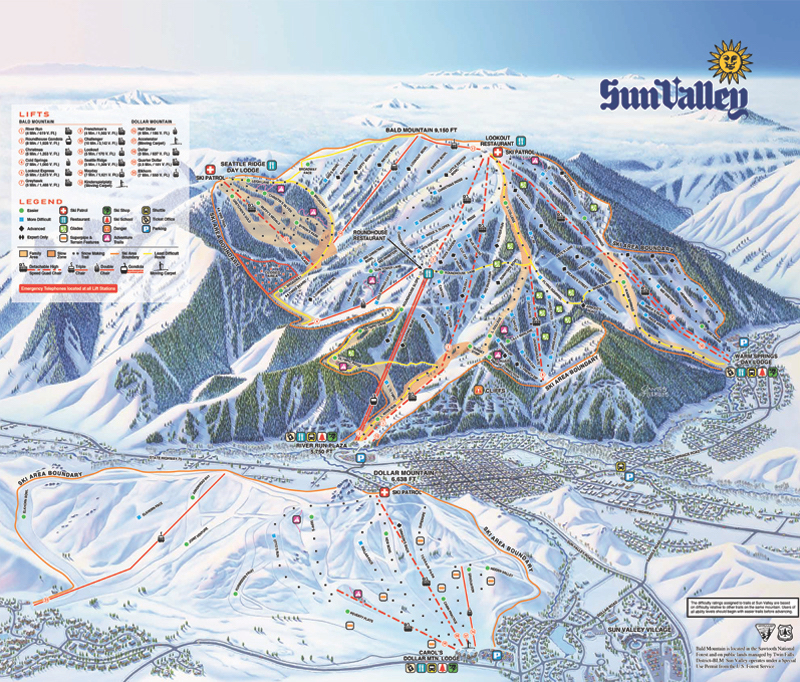 Breckenridge doesn't leave the need for speed to just their skiers, they too are fans of a fast paced workout, having added five peaks in just about 50 years since first opening in 1961. The mountain is a connoisseur of firsts; world's first high-speed quad chairlift, (later replaced in 1999 by the first double-loading six-passenger chairlift), and the first major Colorado ski resort to allow snowboarders and skiers to coexist – a milestone in a long history of snowboarder vs. skier beef. With all that innovative expansion, any rendering of an original ski map is almost unrecognizable, compared to the Breckenridge seen today. 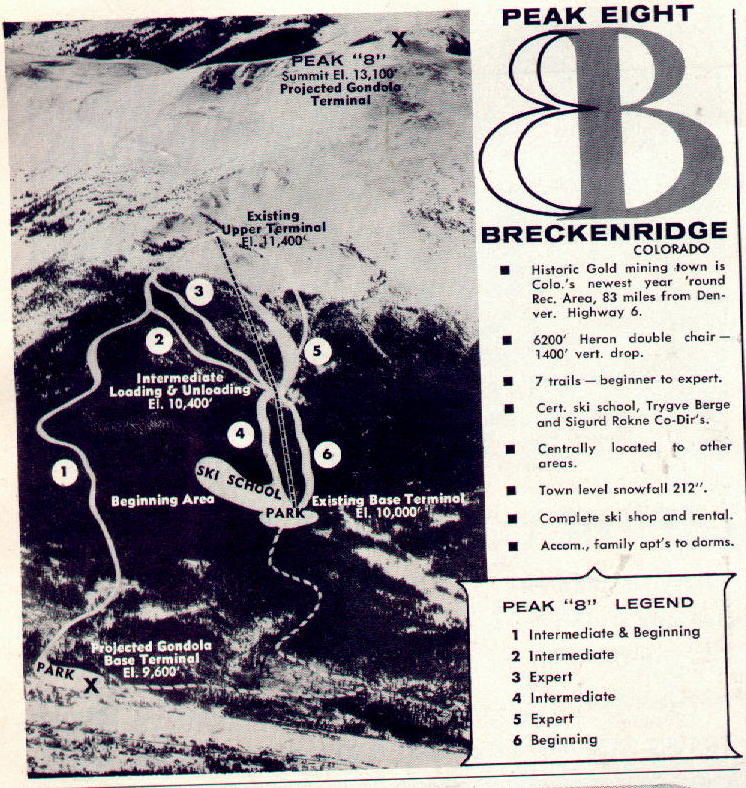 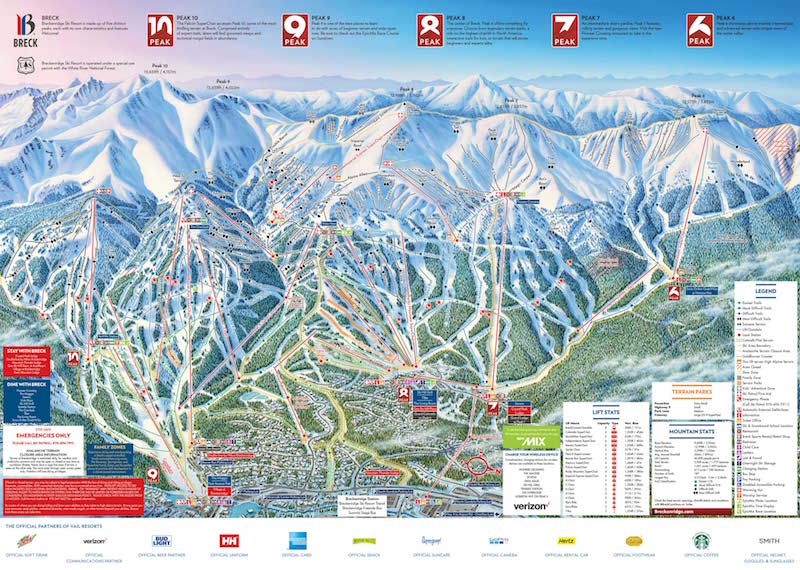 Killington Known to many as “The Beast of the East,” Killington Ski Resort has a long history of exceeding expectations. The resort opened in December of 1958 and proceeded to expand rapidly. Snowmaking equipment was installed in the ‘60s to bring fresh powder to skiers no matter Mother Nature’s mood, a technology considered to be quite a luxury. Today, Killington lives up to its beastly name, as the monstrous mountain offers 155 runs at seven different mountain areas. 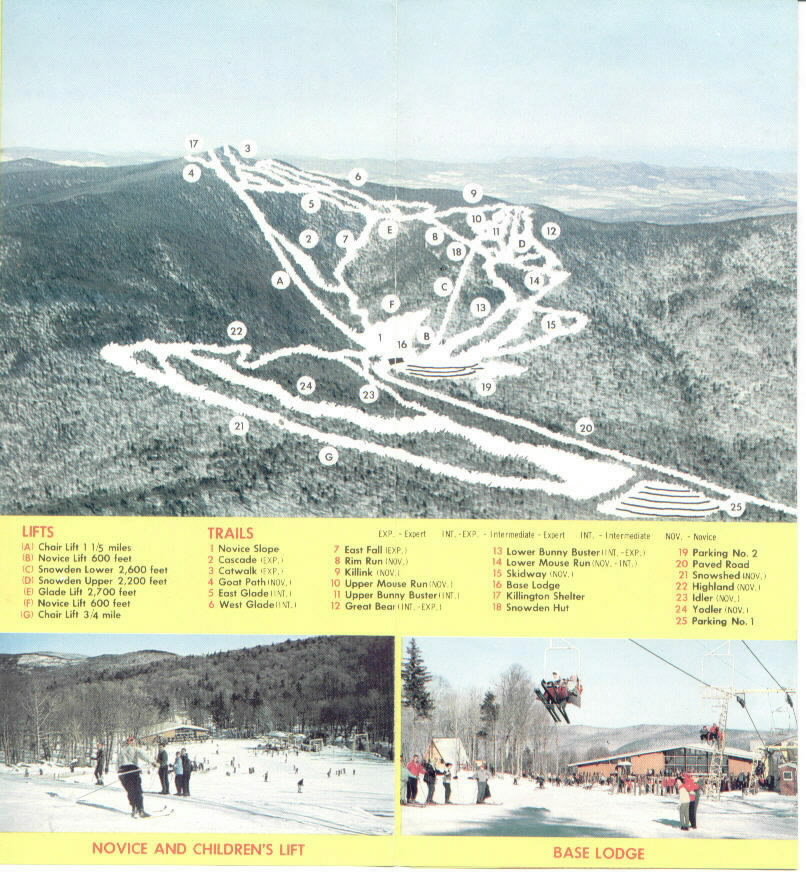 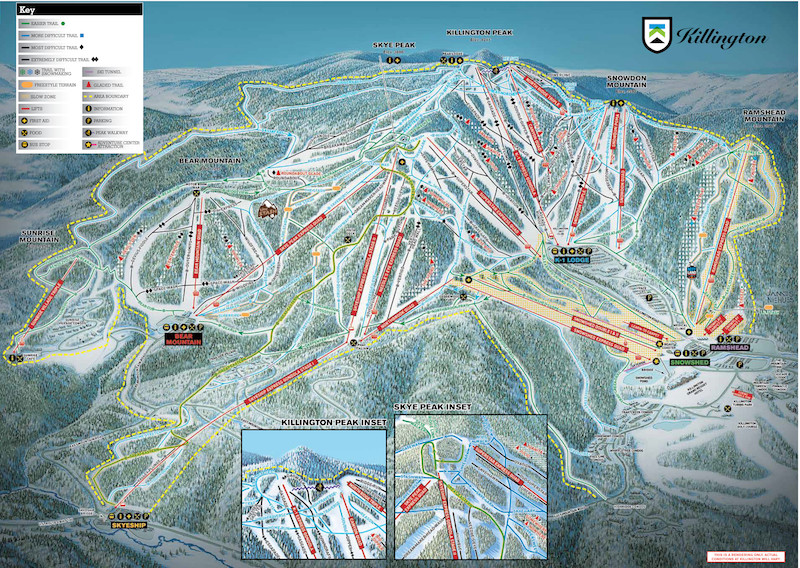 Park City Mountain Resort Having opened in December of 1963, Park City Mountain Resort’s past is as quirky as can be. Originally referred to as Treasure Mountain, the former mining town got in on the ski action in an effort to turn around a downturned local economy. When the slopes first opened to the public, a skier's subway was used to transport skiers 2.5 miles into the mountain’s base using a former mining train. Once deep into the mountain, skiers boarded a mining elevator that lifted them 1,750 feet to the mountain’s face, free to cut and carve their way back down to town. Since then, the mountain has grown aggressively to include 7,300+ skiable acres, 300+ trails and 41 lifts. 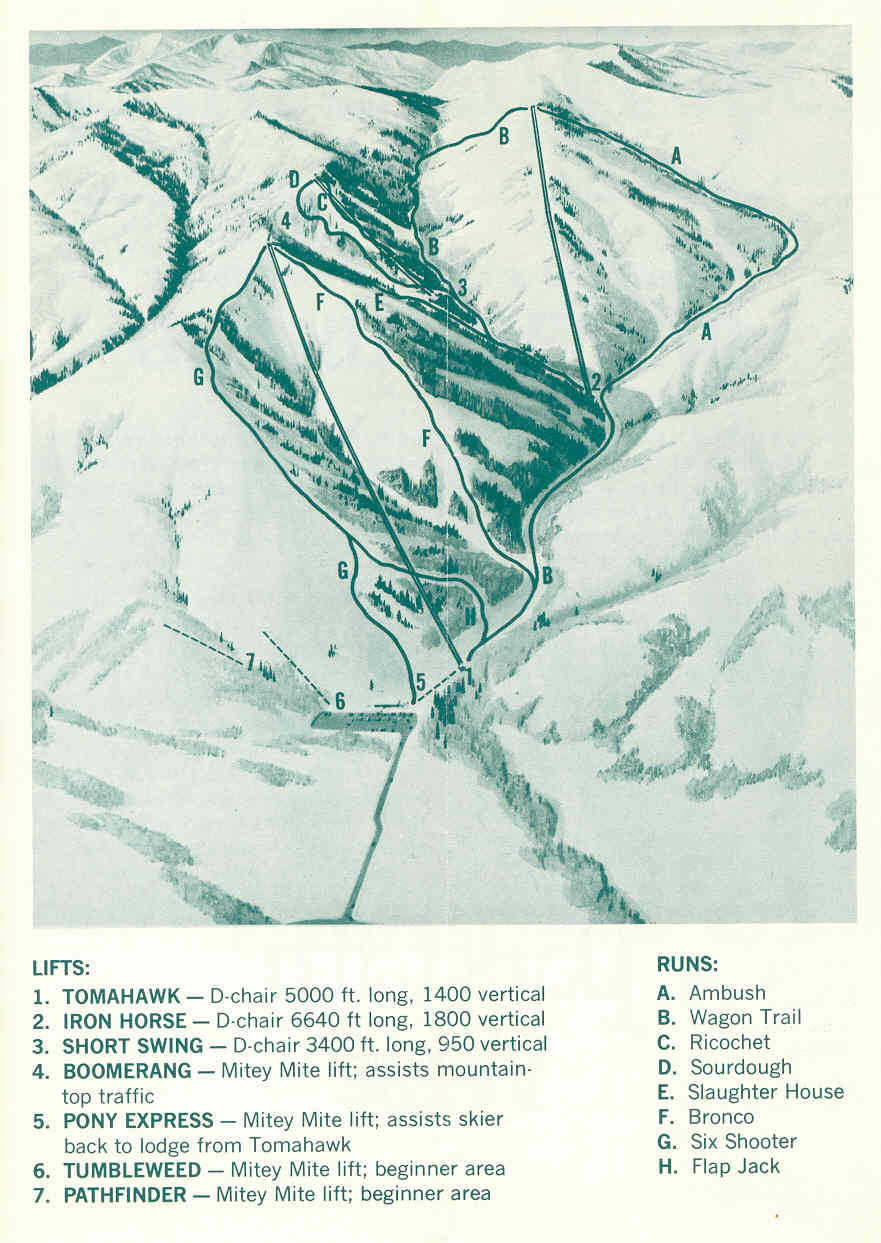 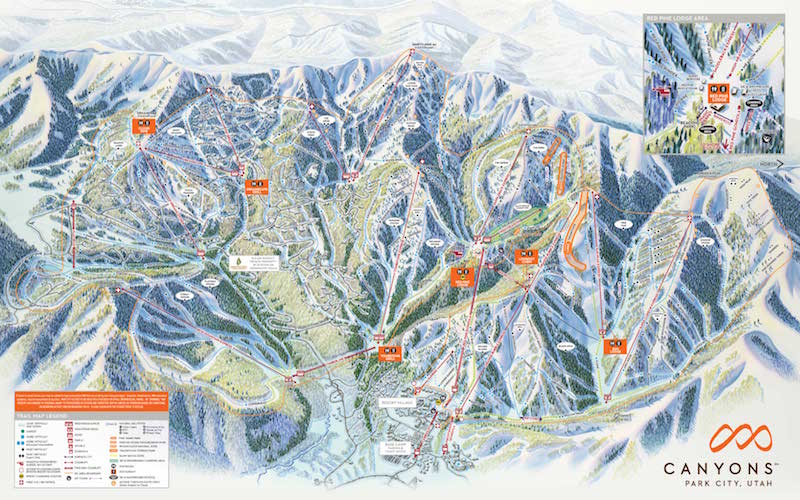 Now that you’ve taken a run down the ski map history slope, get out there and put your knowledge to the test. You can find these mountains using Discovery Maps, and share your snowscape adventures with us by using #DiscoveryMap on your own photos. Or, follow the handle @discovery_map on Instagram to keep up with us!